(March 26, 2014) The ongoing campaign for the Quebec provincial election and renewed discussion of a Quebec sovereignty referendum has occasioned speculation of how the Canadian cookie might crumble. One example is a recent editorial by Lawrence Solomon in the National Post, “Canada needs Quebec.”

By Jon Parsons for The Independent (Newfoundland and Labrador) 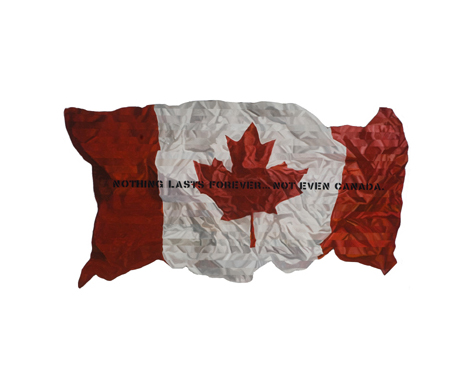 “Nothing Lasts Forever” by Bill Rose. Oil on shaped panel. 2009.

The title for this column comes from a Bill Rose painting by the same name. The painting is an interesting cultural example of Newfoundland nationalism but also expresses a truth: it’s only a matter of time until Canada falls apart, one way or another.

What happens after is anyone’s guess, but the ongoing campaign for the Quebec provincial election and renewed discussion of a Quebec sovereignty referendum has occasioned speculation of how the Canadian cookie might crumble. One example is a recent editorial by Lawrence Solomon in the National Post, “Canada needs Quebec.” Although the latest rounds of polls show that the issue is something of a nonstarter, given the rapid downturn in support for the Parti Quebecois (due in part to the specter of a sovereignty run) and the projected Liberal majority result, Solomon nonetheless carries out a useful thought experiment: what if a Quebec sovereignty referendum succeeded?

Solomon suggests that “the post-referendum negotiations that would ensue would not be limited to the terms of Quebec’s departure from Canada — all the regions and provinces of Canada would examine their own role in the Canada that remained, and jockey for advantage.” In the event of Quebec leaving Canada, Solomon wonders if Newfoundland, which like Quebec is “a distinct society and every bit a nation,” would likewise hold a referendum and “revisit [the] decision to join Canada.” Solomon also wonders whether other provinces, specifically Alberta and British Columbia, would also “pause at the prospect of re-Confederating,” perhaps finding a better option to be joining the United States.

This is, of course, all speculation; however, it is speculation that needs to happen if we accept the premise that Canadian federalism is not necessarily as stable or absolute as it may seem. Another interesting example of this sort of speculation is the novel Dissolution (2012) by Chris Decker, a former MHA and cabinet minister from the Tobin administration. One might get the impression that Solomon took a page directly out of Decker’s book in his editorial, in that they both come to similar speculative conclusions.

Even though there are occasional lapses in terms of novelistic style, Dissolution is a fascinating read and should certainly be on the list of students of Newfoundland literature and politics. The unfolding of the narrative diverges from Solomon’s imaginings in that Newfoundland does not hold a referendum as there is no need: Canadian federalism implodes in the aftermath of a Quebec independence vote and the country simply dissolves (gesturing, in this way, to the title of the book). Newfoundland is essentially set adrift as provinces like Alberta and British Columbia unilaterally declare their independence and consider joining the United States. The reigning Newfoundland Liberal government in the imaginative world of the novel (surely Decker couldn’t have put the PCs in charge!) are left with the difficult task of adjusting to the responsibilities of statehood, which they inevitably succeed in doing.

However, as it is presented in Dissolution, the years following Newfoundland independence are “dreadful for the majority of people.” Set in the mid-1980s, one of the first major hurdles to arise is the collapse of the fisheries. Decker also includes a minor outbreak of contagious disease, widespread unemployment and poverty, and also some rioting and social unrest as further obstacles to overcome. In the end the novel is an (almost clichéd) heroic narrative of overcoming, and of course the country finds its way to prosperity and the protagonist gets the girl.

Leaving aside these stylistic issues, and certainly not to dissuade a promising novelist like Decker from developing his craft, the best reason to take up the book is because of the astute manner in which it speculates and imagines political possibilities. It would be interesting to see how Decker might re-write the narrative if it was to be set in the present day, with the economic boon of oil revenues factored into the post-dissolution equation. Also worth note is the provocative claim that “Canada had to be destroyed before provinces could cooperate with each other,” since in the novel Newfoundland and Quebec renegotiate the Churchill Falls deal and work for mutual benefit on further projects as well.

Decker’s book, like Bill Rose’s painting, certainly has at its core a virulent strain of Newfoundland nationalism, something that brings with it a host of pitfalls (see, for example, Dr. Jerry Bannister’s thoughtful writing for the Royal Commission on Renewing and Strengthening Our Place in Canada). But aside from the issues of nationalism, it is nonetheless worthwhile to attempt to think things through, and especially so any time the question of Quebec sovereignty returns to the fore. In some respects it is not even so much a question of “what if” but “when,” as it seems the Canadian endgame is inevitable. And as Decker’s book suggests, it may well be that in such an eventuality Newfoundland will not so much be given a choice in the matter but rather will be forced to adjust to the reality of renewed statehood.

This entry was posted in Nation states and tagged Quebec independence. Bookmark the permalink.