Posted on September 4, 2014 by Other News Sources

(September 4, 2014) “Solomon noted that the current Gazan war is distinct from the two that preceded it.” Lawrence Solomon joins a Canadian Institute for Jewish Research colloquium on “Israel, Hamas and the third Gazan war.”

This article, by Jodie Shupac, was first published by the Canadian Jewish News on August 13, 2014 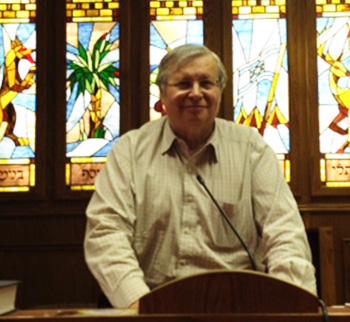 The mechanics of propaganda, the demographics of American supporters and detractors of Israel, Hamas’ sanity and Israel’s gains in the latest Gazan war were some of the topics addressed by four speakers at a wide-ranging Canadian Institute for Jewish Research colloquium earlier this week.

Entitled “Israel, Hamas and the third Gazan war,” the Aug. 10 panel was held at the Lodzer Centre Congregation, where about 50 people people gathered to hear Aurel Braun, professor of international relations and political science at the University of Toronto; Renan Levine, a lecturer in political science at U of T; National Post columnist Lawrence Solomon; and York University professor emeritus and CIJR academic fellow Sally Zerker.

The discussion was moderated by U of T professor Clifford Orwin.

He said the messages have included skewed numbers of how many Gazan women and children have died versus the number of militants, the oft-repeated reference to Gaza as an open-air prison and the pervasive notion that Israel is a regional superpower facing “the wretched people of Gaza and the poor people of the West Bank,” rather than “a tiny state of 8,000 square miles surrounded by four million square miles of Arab territory of untold wealth.”

“This is like looking through the wrong end of a telescope,” he added.

Zerker referred to what she said is a misguided sense of cultural relativism within popular western thought, and argued that Hamas’ actions could be considered “insane” insofar as they are fundamentally self-destructive.

“Radical Islamic movements like Hamas are still in the grips of a mad ideology that perpetuates misery both within and without their own region and societies.”

Levine presented findings from three separate polls to illuminate public perceptions of Israel both inside and outside Israel and the Palestinian territories.

Levine attributes this to  “‘a rally around the flag’ effect… which can be expected when the political leader in a time of crisis responds more like an alpha male than an accommodating or dithering omega.”

The second survey, conducted by Interdisciplinary Center Herzliya, found that most Gazans perceive Hamas as the loser of the latest war with Israel and would choose reconstruction over rearmament.

Levine interpreted these results as “confirming [that]… not all of Gaza is Hamas and some significant perception of people in Gaza would prefer a different course of action than more war.”

Given that Americans tend to be more supportive of Israel than Canadians, Levine said if a similar poll were taken here – and he said he has not seen evidence of one – it would likely show even less support for Israel among young people.

“This shows me this upcoming year will likely be a difficult one for Jewish students at universities in the Greater Toronto Area,” he said, “especially those leaving the Bathurst Street cocoon for the first time.”

Levine added that although the Jewish community has many beliefs about why people oppose Israel, the academic realm has not produced concrete evidence to back up those beliefs.

“Is it all anti-Semitism? We don’t know. Are they motivated because they feel a sense of justice in fighting for the downtrodden? We come to these talks and say this is what we have to fight, but we can’t come to that conclusion because we don’t know what we’re fighting.”

He said more information is needed to understand what motivates North Americans to oppose Israel.

Solomon noted that the current Gazan war is distinct from the two that preceded it. He said Israel has “retained the initiative throughout,” because “so-called moderate Arab states, such as Egypt and the United Arab Emirates, oppose Hamas,” and criticism from western leaders has largely been tempered.

Meanwhile, Hamas has lost a significant portion of its rocket supply, most of its tunnels and the support of many Gazans

“Many have come to see Hamas as an intransigent party… it has never been so diplomatically isolated.”

Still, with anti-Semitism on the rise in Europe and the western press being “biased, as always, despite some hopeful signs of balance in some outlets,” Solomon said Diaspora Jews need to become more vocal in their opposition to the spread of misinformation about Israel.

“Diaspora Jews are timid. They’re afraid to speak up. They’re liberals first and Jews second. If we’re going to have a change in culture, I think, rather than expecting it to come from the Israeli government, we have to do the work here in the Diaspora.”