(August 18, 2016) Politicians could put to bed the lament of high housing costs by restoring freedom and common sense. 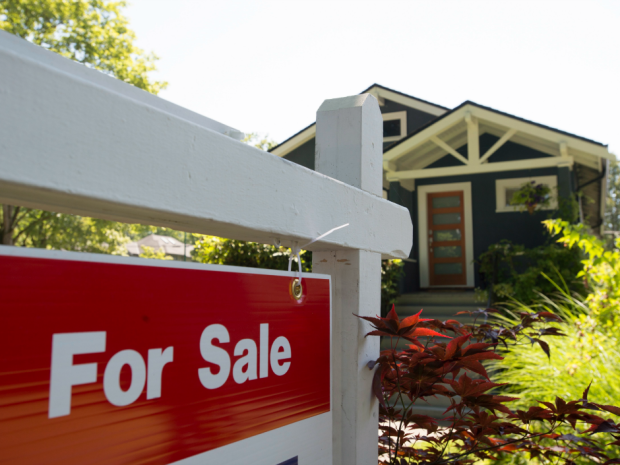 A sold sign is pictured outside a home in Vancouver, B.C. The Canadian Press/Jonathan Hayward.

This article, by Lawrence Solomon, first appeared in the National Post

High housing costs in Toronto and Vancouver are being blamed on Chinese purchasers grabbing too much of an already-limited supply, on green belts outside the cities that bar needed housing and on opponents to high rises within cities, who further limit housing.

Paris, for example, has a very high population density – by some measures several times that of Toronto or Vancouver – and very few high-rise buildings, most of which are concentrated in its outlying areas. An aerial view of Paris shows the rarity of high rises across most of its expanse. Like many of the world’s beautiful cities, Paris was built before the era of elevators and structural steel, yet very compactly – this compactness reduced travelling times, increased efficiency, and created the verve that is characteristic of great cities.

In London, where high rises have been proliferating only over the last two decades, development has also been marked by high population density: The traditional London-residential style is three to four stories. Other European cities –  Barcelona, Naples, Athens – have likewise accommodated a great many people in a style many in Canada would envy.

Without constructing any more high-rises or giving up their greenbelts, Toronto and Vancouver could easily double their population within their existing city limits. Their residents wouldn’t even need to emulate European architecture. As an example, Toronto’s Annex district, one of the city’s leafiest and toniest, is also one of its densest – more than twice the density of Toronto as a whole, ten times the density of the Greater Toronto Area. If Annex-level densities were to come to, say, Toronto’s large low-density Scarborough district, which is now neither as leafy nor as tony as the Annex, Toronto’s population of 2.6 million would increase by 40 per cent, an increase of over 1 million people.

To accomplish that kind of transformation, not just in Scarborough but throughout Toronto, Vancouver or any other city, would require no subsidies, housing programs or other intervention by governments –  to the contrary, it would require only that governments get out of the way, and let the city’s residents exercise the property rights they had a century ago.

Freed of numerous zoning restrictions, arcane planning rules, red tape and other drivers of frustration and cost, the existing housing stock would adapt, expand through additions when children came along, be subdivided when couples became empty nesters. Property owners with large lots would often build a second house as granny quarters – multiple buildings on lots were commonplace in the era before planners took over and homogenized development. Over time, the face of the city would change, bit by bit as each home owner did what came naturally, the effect generally being an increase in the quality and the quantity of the city’s built form, enlivening once-dreary neighbourhoods and increasing the number of people the same land could comfortably, even luxuriously, accommodate.

The tax system also acts to discourage density. A dense neighbourhood of narrow lots requires a fraction of the sidewalks, water pipes, electricity lines, and other city infrastructure required by suburban-style neighbourhoods of wide lots, yet because cities don’t bill property owners on the basis of the cost of providing services, dense development loses this natural economic advantage. Instead, cities finance themselves primarily through property taxes, which also act to discourage density another way – the city punishes homeowners through higher taxes every time they expand their property.

Lawrence Solomon is executive director of Urban Renaissance Institute, a former Vice Chair of the City of Toronto Planning Board, and the author of Toronto Sprawls (University of Toronto Press). Email: LawrenceSolomon@nextcity.com.

Lawrence Solomon is one of Canada's leading environmentalists. His book, The Conserver Solution (Doubleday) popularized the Conserver Society concept in the late 1970s and became the manual for those interested in incorporating environmental factors into economic life. An advisor to President Jimmy Carter's Task Force on the Global Environment (the Global 2000 Report) in the late 1970's, he has since been at the forefront of movements to reform foreign aid, stop nuclear power expansion and adopt toll roads. Mr. Solomon is a founder and managing director of Energy Probe Research Foundation and the executive director of its Energy Probe and Urban Renaissance Institute divisions. He has been a columnist for The Globe and Mail, a contributor to the Wall Street Journal, the editor and publisher of the award-winning The Next City magazine, and the author or co-author of seven books, most recently The Deniers, a #1 environmental best-seller in both Canada and the U.S. .
View all posts by Lawrence Solomon →
This entry was posted in Cities, Regulation and tagged Canadian real estate, housing, Lawrence Solomon, toronto, Vancouver. Bookmark the permalink.