(July 24, 2014) In the Israel-Gaza war, Gaza will be an economic winner, Israel an economic loser. 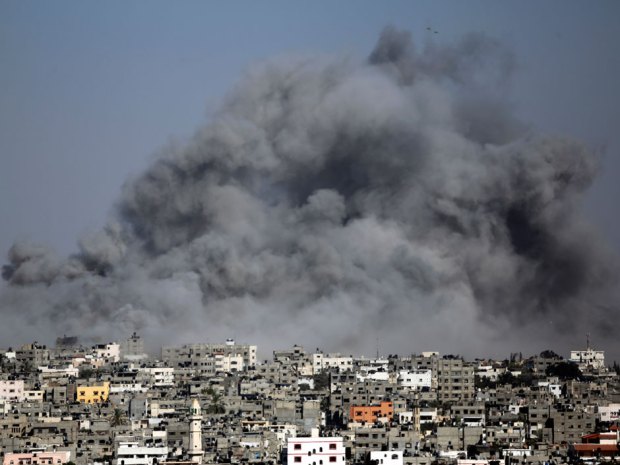 Above, smoke from an Israeli strike rises over the Gaza Strip, Friday, July 25, 2014. AP Photo/Hatem Moussa.

This article, by Lawrence Solomon, first appeared in the National Post

Some wars are fought to a draw. Some have clear winners and losers. In some wars, both sides lose. The current war in Gaza between Israel and Hamas will likely be an anomaly. Barring an Israeli reoccupation of Gaza or the capture or killing of Hamas’s top leaders, both Israel and Hamas seem set to come out clear winners.

Israel’s coming win will be easily understood. Its Iron Dome defensive shield will have operated with a stunning 90% success rate, rendering thousands of Hamas missiles impotent and protecting virtually the whole of the Israeli civilian population. Israel’s air, naval and ground forces will have successfully pounded most of Hamas’s remaining rockets and rocket launching capabilities. Most importantly, much of Gaza’s “underground city” — the extensive network of tunnels extending into Israel to conduct terror attacks and kidnappings — will have been mapped and destroyed.

By the time a lasting ceasefire takes hold, the dead militants among the Gazans will number in the high hundreds, those among the Israeli in the dozens. Although Israelis will grieve at their fallen, most will view the war as having been unavoidable and just. Israel’s supporters and detractors alike in the West will see Israel as the undisputed victor against a militarily inferior Gaza.

In Gaza and among Palestinians in the West Bank, many if not most will view Hamas as the victor. No Palestinian expects tiny Gaza to win a war against mighty Israel, which Hamas supporters claim has the world’s fourth largest military, presumably after only the U.S., Russia and China. The victory will partly be seen in having sent Israelis to fallout shelters and in having sent a rocket close enough to Ben-Gurion Airport to trigger the cancellation of hundreds of flights — an event Hamas has already characterized as “a great victory.” Most of all, the victory will be seen in the body count, not just of Israeli soldiers but also of the far greater number of Palestinian civilians employed as human shields, whose martyrdom Hamas encouraged in demonizing Israel.

An early indication of Hamas’s coming success can be seen in a poll taken this week by AWRAD, a West Bank research firm: 58% of West Bank Palestinians believe Hamas is winning the war while only 7% give Israel the upper hand. Fully 85% gave Hamas a thumbs-up for its performance.

Moreover in one important area — the economic arena — Hamas will be the undisputed winner, Israel the undisputed loser. Twelve days into the conflict, Israel’s defence officials cited $585 million in losses to the government, a figure that could multiply when a final tally is made of losses to the tourist industry, to manufacturing, and to retailers. The country’s economists are now lowering their forecasts of Israel’s economic growth.

The economic calculus is entirely different in war-host Gaza, which stands to be a major beneficiary of the conflict, precisely because so much of its infrastructure is being levelled. The Gaza war is bought and paid for by Qatar, the wealthiest country in the world at almost $100,000 per capita and the chief financier of radical Sunnis, Hamas included. Qatar and other terrorist backers are expected to make Gaza whole after the war and then some, to allow Gaza to rebuild its arsenal and infrastructure for the next war. Hamas can also be confident of support from an ever-conciliatory West — the U.S. just this week provided Gaza with $47 million in aid. The Israeli cabinet is even considering recommending an international $50-billion post-war reconstruction program, in hopes that economic prosperity will pacify Gazans.

The upshot of war’s end will be a massive building boom that resuscitates Gaza’s economy while relieving Gaza’s 70% youth unemployment problem. Much as auto insurance provides us with a new and better car after a highway accident, Gaza residents who lost their homes to an Israeli bomb will end up with new and better homes courtesy of their insurer, Qatar. The building boom could also extend to the terror tunnels, which are up to nine stories deep and extend a mile or more in length. The first 18 discovered have required an estimated 800,000 tons of concrete, enough to build a raft of skyscrapers.

Lawrence Solomon is executive director of the Urban Renaissance Institute and a fellow of the Canadian Institute for Jewish Research. Email: LawrenceSolomon@nextcity.com.

Lawrence Solomon is one of Canada's leading environmentalists. His book, The Conserver Solution (Doubleday) popularized the Conserver Society concept in the late 1970s and became the manual for those interested in incorporating environmental factors into economic life. An advisor to President Jimmy Carter's Task Force on the Global Environment (the Global 2000 Report) in the late 1970's, he has since been at the forefront of movements to reform foreign aid, stop nuclear power expansion and adopt toll roads. Mr. Solomon is a founder and managing director of Energy Probe Research Foundation and the executive director of its Energy Probe and Urban Renaissance Institute divisions. He has been a columnist for The Globe and Mail, a contributor to the Wall Street Journal, the editor and publisher of the award-winning The Next City magazine, and the author or co-author of seven books, most recently The Deniers, a #1 environmental best-seller in both Canada and the U.S. .
View all posts by Lawrence Solomon →
This entry was posted in Nation states and tagged Foreign Aid, Gaza, Gaza tunnels, Gaza War, Hamas, Israel, Lawrence Solomon, middle east, Operation Protective Edge, Palestine, Qatar. Bookmark the permalink.